A week to put diabetes in its rightful place – front and foremost in the UK public’s mind.

We had already worked with Diabetes UK on their incredibly successful national 4Ts campaign so when they asked us to devise concepts, copy and design for their annual Diabetes Week campaign we were really happy to get on board.

There were two clear objectives with Diabetes Week 2012 – to raise awareness of the incredible research work funded by Diabetes UK and to raise funds to ensure more could be done. Key audiences included those whose lives are impacted by diabetes, Diabetes UK supporters – active and inactive – and also politicians, policy makers and opinion formers.

There have be some really significant breakthroughs in diabetes research. With supporters funds there could be many more. We wanted to make supporters of Diabetes UK feel like they were part of this exciting research story and that it was they who could help make the next big breakthrough in diabetes treatment or prevention.

For Diabetes Week 2013 campaign the brief was a little different. It was not so directly aimed at raising funds but more about raising awareness and using the week to give people with and connected to diabetes a voice. It also required more of an online focus.

As with the 2012 campaign, key audiences for DW13 included those whose lives are impacted by diabetes and Diabetes UK supporters – active and inactive – but also politicians, policy makers and opinion formers.

Diabetes, while not a life-threatening condition, is still challenging to live with. Very often it’s talked about in terms of what you cant do – can’t eat, can’t do something. We wanted to create a much more positive framing of life with diabetes – it’s not about what you can’t do, it what you can in spite of the condition. 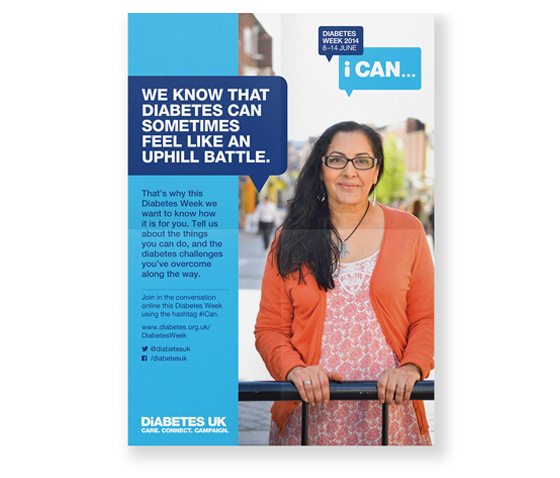 “By harnessing a positive, feel-good message, and a simple ask to Tweet, share a Facebook post, or take a picture or video under the unifying banner of ‘i Can’, we reached over 8 million people through social media alone. This is a fantastic achievement, especially when compared to our average weekly reach of around 750,000 people. In fact, Diabetes Week 2014 was our most successful to date in terms of its reach and engagement” Diabetes UK

This case study is categorised: Campaigns

How do you engage young people with an old age campaign? This was the question for HelpAge – an international charity that fights for better rights and care for older people across the globe.