21st century power and the people 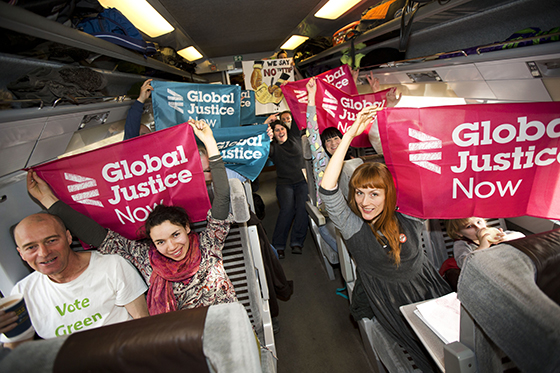 World Development Movement (WDM) fought for justice for the world’s poor for more than forty years.

Dealing in both policy research and direct action protest, it strove to expose the root causes of poverty and make big business and governments accountable for their impacts across the world.

WDM helped stop international ‘free trade’ agreements that would have swept aside workers’ rights and environmental protections. It was a major presence on the streets during the anti-capitalist protests of the late 90s. It was one of the founders of Fairtrade.

But the discourse around global politics has moved a long way since its foundation. It’s no longer The West versus the rest, or North versus South. It’s about international corporate interests and global elites threatening the wellbeing of the vast majority of people and the natural world.

And for many “development” has become associated with big government projects and a neo-liberal agenda. It’s treated with great scepticism by some of the very organisations with which WDM sought to build alliances.

“When speaking to people here in the UK and new allies across the world, it has become increasingly clear that our old name just doesn’t explain who we are and what we do.”

WDM needed a new way to present itself and its ongoing radical role in this new political landscape.

It needed an identity that helped WDM’s staff connect more easily with potential grassroots allies around the world, as well as people on the street in the UK who they approach with their messages.

And for a passionate and vocal membership of long-time activists and supporters around the UK, it needed to be something that maintained the organisation’s credibility without ‘dumbing down’.

WHAT DID WE DO? 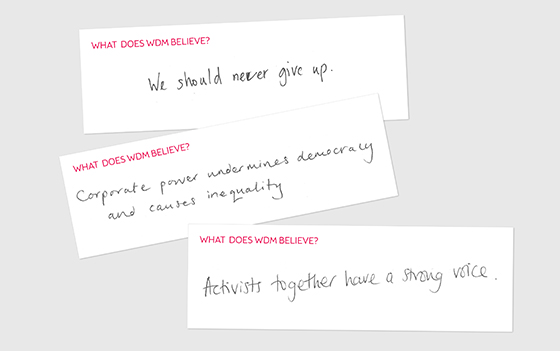 Neo worked with WDM to figure out the corners of this complex field. We explored the appetite for change among supporters and friends, and asked where it could find a distinctive position amongst the many new and established campaign groups fighting against debt, tax avoidance, austerity and other strands of ‘economic justice’.

We began by facilitating an away day with the whole staff team and trustees, and speaking one-to-one with funders, partners and critics. We canvassed opinion from member groups around the UK. These are some of the smartest and most articulate people around, delivering diverse often sceptical, opinions, not least on the value of investing in brand identity.

With the project team, we helped navigate the process around consulting with the membership and gathering the support required to change the name of the organisation. Drawing on what we’d learned along the way, we established a brief for what a name that shifted from “development” could be. Together, we created, explored and then whittled down the options.

As ‘Global Justice Now’, the organisation now has a name that positions it clearly in its core work, and reflects the direct way it addresses the big economic issues of the world.

With a new simpler articulation of its core purpose, Global Justice has found a way of talking about its work that avoids jargon, and draws more on the tone of voice of its campaign work.

“The new identity is an opportunity to draw a line and say we’re going to do things differently.”

Visually, we wanted to strike a balance: to evoke the injustice of inequality, the credibility of their thinking on economic matters and the power of action.

We delivered an identity with a new, contemporary typeface, a strong, expansive colour palette and a suite of textured graphics that can be toned up or down depending on the context.

The new logo moves them away from the old brand’s ‘Panorama globe’ take on global poverty, and references financialisation and inequality in the 21st century.

Its shape is smart and sharp; added texture speaks of their strong legacy as a campaigning organisation, and a people-powered movement.

Meanwhile, the supporter magazine relaunched as Ninety-Nine, and offers a more striking and contemporary vehicle for news and reflection on the progress of economic justice campaigns in the UK and across the world. The balance of sharpness and texture has been an anchor for us as we created its look and feel.

Online signups surged as the organisation relaunched in January 2015. In the first half of 2015, more new members joined Global Justice than in all the previous year for World Development Movement.

Two new regional groups were created, and support for the campaign to Stop TTIP exceeded its targets.

And from the organisation’s independent-minded and often long-serving supporter base, there’s been a notable absence of complaints.

“Overwhelmingly our supporters and our members felt that we got the engagement right. Which is amazing. How easy it would have been to have got that wrong.”

Working with a group as radical and committed as Global Justice Now, to bring it to new audiences and revitalise its impact, has been a privilege.

In 2015, we struggle to think of anything that matters more.

This case study is categorised: Brand

We'd worked with True Technology and knew they had great products. Sure Chill stood out and became a stand alone brand which we helped define for the market with a simple but powerful brand identity.