While universities have fully embraced the power of branding to attract students and income, university alumni associations often lag far behind.

Most feel disconnected from the student experience and remain largely irrelevant to the lives of those who have graduated. What could be a potent opportunity to build on an engaged audience and create a community of advocates for the university is lost.

London South Bank University (LSBU) faced exactly this challenge. While the university itself is well-regarded by students and is building its own brand as a ‘real world’ university that equips students for the reality of work today, its alumni association had little recognition or connection with alumni. This was in spite of the fact that the services they offered – mentoring, careers advice, networking opportunities – were genuinely useful to former students and went far beyond the usual ‘magazine and donation request’ that typify most alumni communications.

The team at LSBU wanted to create a brand that captured the value of its offer and built on the engagement LSBU had with them when they were students. It needed to complement the LSBU brand but also feel distinct from it, reflecting the differences between audiences and their specific interests and needs. Crucially, it needed to move away from any old-school perceptions of alumni associations – as an organisation that contacts you once year to ask for money – to something that connects you to a network of likeminded individuals with whom you can continue to learn.

We worked with LSBU first to understand what it was that alumni – recent and more experienced – understood about and wanted from their alumni association. From our conversations and research it became apparent that most of them simply had no idea what LSBU Alumni Association was or could offer them. It had no real profile at the university and very little presence once students had left. It was simply not on the radar, meaning that both the university and its former students were missing out on the rich potential of an engaged alumni community.

What alumni wanted was a clear understanding both of what they could get from the association and, importantly, what they could give back to other alumni and the university. This was measured not in terms of financial donations but in time and experience – there was a genuine appetite for LSBU’s alumni team to act as an enabler or platform for anyone who had studied at the university to maximise their own potential and that of their peers in the real world.

A subsequent workshop with the alumni team at LSBU helped us arrive at a new articulation of the association’s purpose – one that spoke to its ambition to increase the potential impact in the world of every LSBU alumni.

This was supported by a shortening of the name – simply to LSBU Alumni – and a clear, concise articulation of the offer and a set of personality traits that reflected its energy and aspirations – ‘smart’, ‘supportive’, ‘nimble’ and ‘London’, the location of the university being central to its identity.

“Our engagement with alumni and students has gone through the roof because our brand and tone of voice captures the very essence of our community”
Olivia Rainford, Senior Manager, Alumni Relations 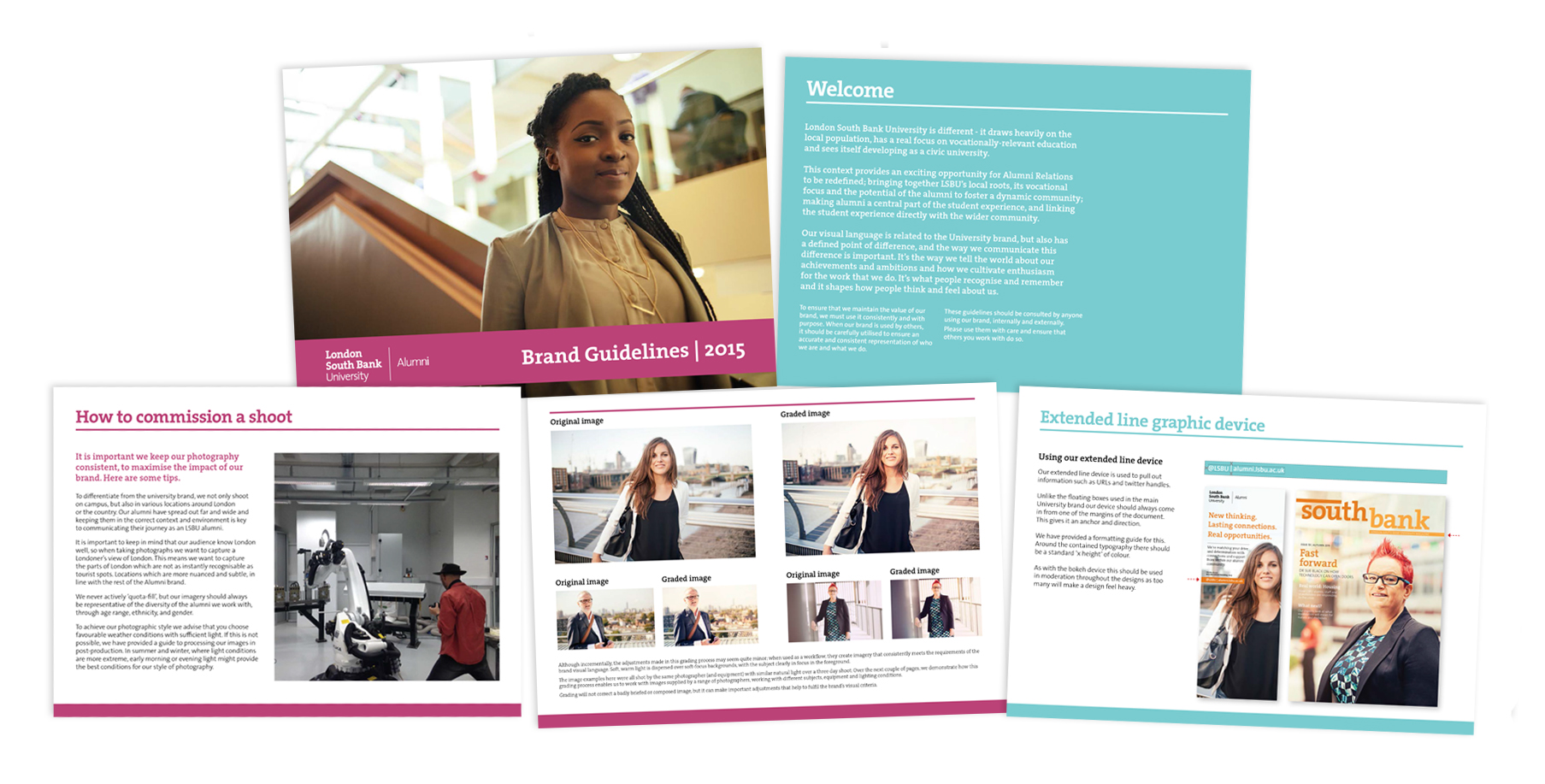 With a new positioning in place we were able to start work on a refreshed visual identity – one that would reflect the new, more ambitious and contemporary purpose of LSBU Alumni. This took inspiration from the LSBU undergraduate brand concept ‘in the spotlight’ and featured a subtle ‘bokeh light’ effect. A three-day photoshoot with alumni across London made sure that the realness that is integral to LSBU and the alumni offer was reflected in its visual brand. A redesigned magazine – named simply South Bank – and event materials provided the right media to roll out the new visual style.

Both Neo and the team at LSBU Alumni were keen that this new, more relevant brand didn’t just exist on printed communication but could be introduced to recent graduates – a key audience – in a more engaging way. The 2015 graduation ceremony presented an unmissable opportunity to launch the new alumni brand to those just starting out on their post-university lives.

We devised and, with our film production partners Fatsand, produced a short film that opened the graduation ceremony and introduced LSBU Alumni to graduates at this critical moment. Filmed on location at South Bank and nearby Elephant & Castle, the 60-second conceptual short captured the energy, ambition and potential of London at dawn – ambition and potential that is matched by that of LSBU graduates and could be maximised by a thriving alumni community.

The new alumni brand is still in its infancy but is already helping attract new interest in the association. Like LSBU, we’re optimistic that other alumni associations can move away from outmoded perceptions to become relevant, useful and aspirational organisations in the lives of former students – and that meaningful communication is the best way to start building this relationship.

“Not only did Neo help us articulate LSBU Alumni’s aim in a meaningful way, they gave us a visual identity that is deserving of our inspirational community – the ‘real people’ of South Bank.”
– Olivia Rainford, Senior Manager, Alumni Relations

How do young people feel about sports? When Sport England asked this question, the answers were more complex than you might expect.