At the age of 15, I experienced my first sailing trip along the south coast of the UK. I spent five days living aboard a 35ft sailing yacht, learning to pass my RYA Competent Crew course alongside four other crew members and our salty sea dog instructor. It was such an immersive experience that when I got home, I cried for about two days straight, and felt very lonely after spending five days constantly surrounded by a diverse bunch of interesting people in a challenging and inspirational environment.

I didn’t think it was possible for a work conference to produce that same intense emotional come-down. Although, OK, I didn’t actually cry this time. But I definitely felt as though my train home from Oxford to Brighton was transporting me from amazing dream world of the two-day eCampaigning Forum 2015 (ECF), back to reality with a bang.

Not that my usual reality isn’t a great thing. My role as Digital Strategist at Neo gives me the opportunity to get involved in a range of campaigns and communications strategies for our values-led clients, ensuring we optimise the digital side of things. So, ECF sounded right up my street: the chance to attend a conference about using digital to help charities and other ‘good’ organisations campaign for the things that matter most.

You might have noticed that’s the second time I’ve used the word ‘conference’. What connotations does that bring up for you? It makes me think of big commercial, corporate events with jam-packed seminar rooms full of hundreds of people spending a day or two sitting and listening to talks from a wide range of ‘experts’, desperately waiting for the next coffee break so the real networking can take place.

ECF, on the other hand, was actually an unconference. Based around the concept of ‘Open Space’, the agenda dedicated the majority of time to self-organising sessions proposed by any one of the 150 participants who attended from as far afield as Australia. It’s pretty amazing to go to an event where the organisation of the conference is just as interesting as the world-changing content we had all come together to discuss. I’m going to write a couple of other posts related to the interesting things we shared amongst us, but for now, I want to focus on Open Space as an inspirational organisational concept.

I can see how using Open Space as a format is a challenge in itself. There needs to be a balance between traditional presentations from speakers/experts which inspire and ignite further discussion, and keeping the focus on Open Space. These sessions and the more informal socialising breaks gave us the opportunity for real peer-to-peer engagement and networking – undoubtedly always the best part of any conference. 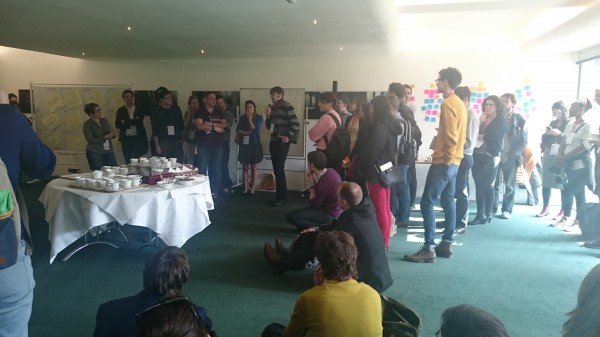 The concept of Open Space and its guiding principles were introduced to everybody at the beginning of the first day. Some people had attended events using this format before, but most of us were newbies. Three of my favourite of these principles are:

I found the first two principles particularly pertinent. Because of the nature of the Open Space concept, there were 12 sessions running concurrently at ECF. Naturally, it was often difficult to choose between two or more of the different sessions. And then of course, once you’ve decided, you start to worry about whether you’ve made the right decision and whether other people are having a much better time in one of the other sessions. The grass is always greener. And boy was the grass green at ECF: just to make you even more jealous, we were privileged to be based in Oxford University’s Keble College for the duration of the conference. The perfect kind of inspiration.

Anyway – Harrison Owen, founder of Open Space, had thought about this ‘grass is greener’ issue and proposed a solution. Alongside the guiding principles sits The Law Of Two Feet:

“If at any time during our time together you find yourself in any situation where you are neither learning nor contributing, use your two feet, go someplace else.”

This gave everybody at ECF the right and responsibility for their own learning. In practice it meant that, if at any point we felt as though we weren’t getting what we wanted out of the session we had chosen to participate in, we could literally use our two feet to get up and join another session.

It sounds like a simple rule, but it still takes some guts to get up and walk out of a group circle in the middle of a discussion. I invoked The Law Of Two Feet once during my experience at ECF when I found the size of the group and broad nature of discussion a frustrating combination. So, I used my Two Feet and joined a much smaller group about creating a culture of learning from failures – that was a fun one!

Now I’m back from ECF, I’m wondering how I might be able to use at least some of the principles from Open Space in how we work here at Neo. It would be great to hear from anybody who has successfully used this format in their workplaces – hey, in fact, that’s definitely a session I’m going to propose at ECF 2016…