How do you persuade 1.8 billion people to take one action to help protect the environment? Launch a truly global campaign.

On the last Saturday of March, people across the world take a simple action against climate change. They switch off their lights for an hour.

Spanning 24 time zones and six continents, Earth Hour is far more than a quick, one-off event. It unites billions of people in 172 countries. Schools, businesses and iconic landmarks – from the London Eye to Sydney Harbour Bridge – get involved. It’s a truly global movement that duly demands an inspiring, robust website.

Earth Hour is organised by the WWF. A fact not commonly known in 2012 when we began working with them. At that time participant numbers in the initiative were fairly low and they often didn’t support the charity’s longer-term campaigns.

WWF-UK wanted to tackle this problem by aligning Earth Hour more closely to its brand with an integrated campaign that not only made best use of social media, but effectively targeted a younger audience too. 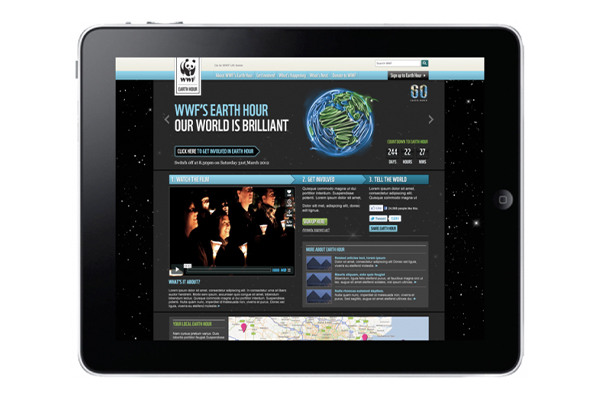 If the Earth Hour campaign was to have both broad and fresh appeal, we needed to establish what attracted participants to it in the first place with some comprehensive audience research. We surveyed people online and conducted a range of focus groups. And we looked at the best way to position Earth Hour – making sure it connected closely with the WWF brand while remaining up-to-date, interesting and all about ‘going beyond the hour’ in a lifelong commitment to sustainability.

Our integrated campaign wasn’t only directed at the widest possible audience, but also designed to tell the whole story of Earth Hour – from climate change to global celebration.

A surge of engagement

The 2012 campaign attracted the biggest response to date. More young people around the world really began to engage with Earth Hour, while stronger branding encouraged more participants to support WWF’s activities in the longer term. 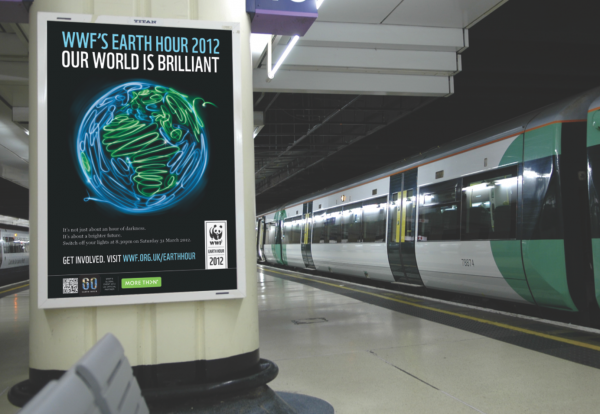 By 2015, the Earth Hour website was due for a redesign – a challenge we were keen to take on.

It was clear that a huge amount of content had been added in the past few years. The website was no longer easy to navigate. The homepage was responsive, but the rest of the site wasn’t. The user experience on a mobile phone was particularly poor. It felt confusing and old fashioned.

Our challenge was to restructure, redesign and rationalise content on the site to give users the kind of brand experience they’d expect from WWF. A smooth sign-up user journey was also needed to increase email subscriptions.

The 2015 redesign resulted in a site that was much simpler, more consistent and easier to navigate. It better reflected the key message of the campaign: Earth Hour belongs to you.

And the site honoured that message by making the campaign accessible to all, whether as activists, schools or just supporters who wanted to do their bit. With just a few clear steps, they could sign up, put themselves on the interactive map and tell others what they were doing for Earth Hour.

The WWF team was much happier with how it looked, operated and how easy it was to update.

The results spoke for themselves. More people than ever shared what they were doing for Earth Hour: an overwhelming 27,000 events.

Every hour should be Earth Hour

Over the years WWF’s Earth Hour has continued to show people around the world how easy it is to take positive, practical action. Now, at a time when a global response to the climate crisis is more crucial than ever, every hour should be Earth Hour.

If we can elicit this kind of response for a simple lights switch off, imagine what could we achieve if we set our sights even higher?

We Unite - The Little Book of Conflict Resolution

In the tumultuous wake of Brexit, dialogue between the two sides of the debate felt crucial.